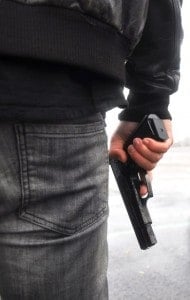 Over the past few years, deadly active shooter incidents have become a prevalent concern to employers and employees across the nation in wake of the frightening realization that workplace violence can happen anywhere, to anyone, and at anytime.

According to the Census of Fatal Occupational Injuries, a study conducted by the Bureau of Labor Statistics (BLS), from 2006 to 2010, an average of 551 workers per year were killed as a result of work-related homicides.

Workplace violence not only results in the tragic loss of innocent life, but significantly impacts the livelihood of those who survive an incident.

The Federal Bureau of Investigation estimated that non-fatal workplace violence in 2011 cost the American workforce approximately $36 billion per year.

Important patterns within these statistics help us understand the severity and seriousness of fatal homicides and violence in our workplace today:

The threat of workplace violence is real!

While workplace homicides are not as likely or quantifiably substantial as the 4,405 non-violent/non-homicidal fatal workplace injuries that occurred in 2013, these statistics validate the reality that workplace violence is often a deadly incident that can happen to any business for sometimes unrelated reasons and at other times highly connected motives.

The integration of workplace violence prevention and preparedness into businesses throughout the United States has never been more imperative.

Awareness does not always translate into effective change. A 2005 survey conducted by the Bureau of Labor Statistics found that “over 70% of all establishments (surveyed) did not have a formal policy to address workplace violence.”

Progress is being made in the understanding and prevention of fatal workplace violence, but room for improvement always remains when striving to preserving human life.

With the mission of improving your chances of survival, ALICE provides you and your company with the knowledge and training to prepare for the uncertain; effectively respond to threats; and protect the lives of those in your workplace.

Call or contact ALICE Training to learn more or schedule a training class for your business.