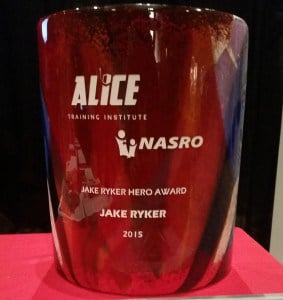 Jake Ryker is the hero who responded proactively to stop the Thurston High School Shooting. On May 21, 1998, 17 year old Jake was a student at Thurston High School in Springfield, Oregon. On that fateful day, Jake was sitting in the cafeteria when another student walked into the building and started shooting. Jake’s instinctive response was to be proactive rather than passive. Despite being shot and wounded by the attacker, Jake led the effort to subdue the gunman and held him until law enforcement arrived. Jake was able to initiate taking back control while under attack.

This event verified that counter tactics, victims taking back control, were not only possible but had been used successfully. This tragedy occurred before the ALICE strategies were formalized and it has become the example that ALICE points to when told that training on counter strategies will never work. Proactive response has been shown to work in mitigating casualties time and time again, which is why it is so important to highlight individuals like Jake, who use human behavior to stop violence.

About the Jake Ryker HERO Award

This is the first annual award with more to come. If you know other heroes who are deserving of this award, please go to www.ALICEtraining.com/hero-award to submit a nomination and learn more about this honor.

ALICE Training is changing how schools, universities and businesses respond to armed intruders. ALICE (Alert, Lock-down, Inform, Counter, and Evacuate), developed after Columbine, teaches strategies to survive a life-threatening event. Supported by educators and law enforcement across the country, ALICE is quickly becoming the new standard of care.

Please reach out to us with any questions. Contact Us